December 2022 Welcome to All Bird Products... We are open and Shipping! 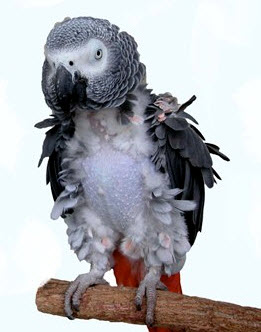 The most common cause of feather plucking appears to be chelated calcium deficiency....

Feather plucking (and other similar forms of self mutilation) are major problems. Most commonly a problem in parrots, feather plucking can also occur in other bird species. Although most feather plucking cases have nutritional problems as their origin there are some medical conditions that can be implicated so veterinary testing may be required. The most common cause of feather plucking appears to be chelated calcium deficiency.

As research tells us that 98% of pet birds are getting less than the recommended levels of calcium in their diet it is actually surprising that there aren't more cases of feather plucking. Calcium is involved in both nerve and muscle function. Calcium deficient animals often show nervous behavior such as fear, aggression and feather plucking so the central part of our recommendation is to add CalciBoost to the diet for feather plucking birds.

The important thing about CalciBoost is that the calcium it contains is very easily absorbed from the gut into the bloodstream. In actual fact the amount of calcium it supplies is quite low but its bio-availability makes up for that. Our normal recommendation for CalciBoost is to supply it five days a week for the first month and reduce that to twice a week after that. The key to the high early dose is that calcium deficient birds have low reserves in their bones.

Early supplies get sucked up by the bones so the nerves can still be denied adequate quantities. It is the movement of calcium in and out of blood, nerves, muscles and bones that leads to the variable severity of calcium related symptoms. For birds showing severe calcium related symptoms such as fits and seizures we would often recommend three 'daily doses' directly into the beak two hours apart. Birds this distressed are normally easy to handle.

The good news is that The Birdcare Company have developed a special pack to help with feather plucking... A three product pack to help feather plucking birds. This pack is available in 3 different sizes. The combination of the three supplements are designed to help with nutritional deficiencies and stress which can trigger off feather chewing or plucking.

CalciBoost will help to deal with the chelated calcium deficiencies as outlined above.

Potent Brew is a live liquid probiotic which helps to reduce stress levels which can be associated with feather plucking.